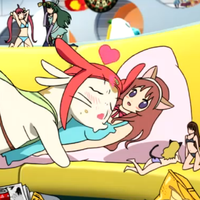 FUNimation has confirmed the early Cartoon Network listings that had comedy sci-fi anime Space Dandy returning to the Toonami block for its second outing on July 5th.