Band will be releasing third full album on August 6th 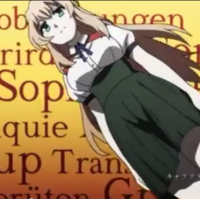 If you need another reason to check out the latest Brynhildr in the Darkness, episode 10 of the adaptation of Lynn Okamoto's sci-fi manga introduces a new opening set to "Virture and Vice" by Fear, and Loathing in Las Vegas.  The band, whose work has also been featured on Hunter x Hunter, will be releasing their third full album on August 6th.