Nintendo Reveals New, More Open "The Legend of Zelda" for Wii U (UPDATED) 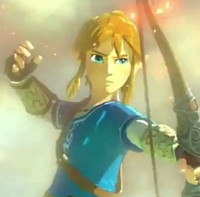 The Legend of Zelda producer Eiji Aonuma came on Nintendo's E3 presentation to reveal a glimpse of the latest game in the series. The new console entry opens up a vast world players can explore at their leisure, and the first image on screen showcased an expansive, gorgeous HD landscape.

While Aonuma aims to buck some of the series' conventions with a more open, explorable world, he did say they would stick to some of the mainstays. Namely, powerful enemies roaming peaceful landscapes, as demonstrated when a laser-firing beast charged after Link before succumbing to a volley of the hero's arrows.

"Bayonetta 2" Gives Its Heroine a Mech of Her Very Own