"I wanted to exchange my favorite anime with others." 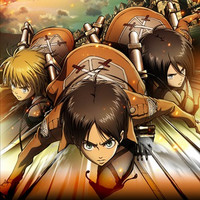 Oita Prefectural Police's Consumer and Environmental Protection Division has arrested a 39-year-old male office worker from Omuta-city, Fukuoka Prefecture, on suspicion of copyright infringement (infringement of public transmission rights), then referred the case to the Public Prosecutors Office by June 11.

The suspect is accused of using the file-sharing software Cabos to upload episodes of popular TV anime including Attack on Titan and One Piece from his PC to the internet without the respective copyright holders' permission in December of 2013. The illegal act was found by the prefectural police's cyber patrol. He has already admitted his charge and said, "Though I knew it was illegal, I wanted to exchange my favorite anime with others."

Currently in Japan, there is no legal way to watch the anime episodes of Attack on Titan and One Piece

online for free (except the first episodes).

OPINION: Why One Piece Episode 957 Deserved Every Bit Of Praise It Got