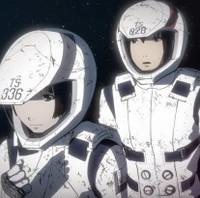 In what seems like it should be an interesting experiment, all 12 episodes of the sci-fi anime Knights of Sidonia series will premiere July 4 in all territories Netflix is available. And, as the series wraps up its spring Japanese run, the service has posted their subtitled trailer on Youtube.

The first Netflix original anime series, Knights of Sidonia, based on the popular manga series of the same name, follows Nagate, a low-born youth in a society of genetically engineered refugees who escaped the destruction of Earth one thousand years earlier and now occupy the massive ship Sidonia. When Nagate's talent as a pilot is revealed he becomes one of Sidonia's elite defenders against the Guana, shapeshifting aliens bent on eliminating humans from existence.

Last month, a number of voice actors announced their roles over social media.

I voice the Honoka sisters in Knights of Sidonia, coming to @netflix July 4th :) pic.twitter.com/wIGjtZ5m5l

I am also in Knights of Sidonia as Mozuku Konata, Operator B (dull name but tons of dialogue) & more The Cast Rocks! pic.twitter.com/uHMcoZQEPL

Watch out for Norio Kunato in the upcoming Netflix exclusive anime (their 1st), Knights of Sidonia! July... http://t.co/ZUgL4nBvyn

Keep an eye out for Knights of Sidonia on Netflix!

Vertical is releasing the original manga in North America.