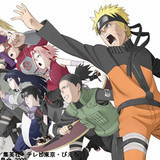 Phantom Blood will be on three deluxe omnibuses while Battle Tendency will be on four. The Jojonium guide/art books are also in cards.

#vizpanel what a way to announce JoJo's parts 1 and 2 pic.twitter.com/RLESQSluW9

On the Naruto front, Road to Ninja, the 10th anniversary movie with the mirror version of the case, will be presented in a limited North American theatrical run while Naruto Spin Off! Rock Lee and His Ninja Friends is getting a dub this fall.