"Mighty No. 9" Gets Animated Series, Crowd-Funds for Bonus Content 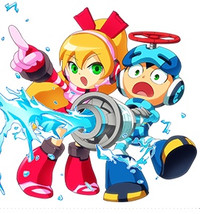 As promised, Keiji Inafune and the Mighty No. 9 team had some big announcements to make at Anime Expo. Chief among them was the reveal of a CG-animated series, currently in production at Digital Frontier (Resident Evil: Damnation, composite work for Wolf Children and Summer Wars) and slated for a Q2 2016 release.

You can see a teaser for the series—for which Digital Frontier intends to make 26 22-minute episodes aimed at children ages 6-11—along with a synopsis below.

"Half human, half robot, all Mighty"

In the year 2099, humans have become dependent on robots not just for manual labor but also entertainment. The most powerful robots in the world fight in front of humans in a popular league called the Battle Colosseum.

BECK is a small combat robot made to fight in the Battle Coliseum as a part of the MIGHTY NUMBERS, the strongest robots in the world. But since Beck is the only robot in the world with a human heart, he's also the only robot that gets scared in combat. The good news is that he also possesses the ability to turn into any other robot. The bad news is that since his emotions are wired to his abilities, he often finds himself malfunctioning in battle.

One day a notorious engineer named DR. BLACKWELL releases a virus that infects every robot in the world...everyone except Beck. Dr. Blackwell remotely controls the infected Mighty Numbers to lead a rebellion to destroy mankind. Beck suddenly becomes the only robot available to stop the Mighty Numbers.

As Beck tries to save the world, he will be joined by CALL, his overly serious robotic sidekick; DR. WHITE, the young but socially inept creator of the Mighty Numbers; and DR. SANDA, the lazy but wise team leader. With each of their help, Beck will learn how to deal with his emotions and become the hero they need him to be.

There's also a new crowd-funding campaign aiming to drum up some money via PayPal for even more bonus content. Here's the announcement video for the campaign, which the site stresses will not be used toward any existing content in the current state of the game.

The first stretch goal, full English voice acting, kicks in at $100,000. You can find out more about the campaign, including all the backer incentives and more, over at the official site and the latest Kickstarter update.