VIDEO: Promos for Goro Miyazaki's "Ronia the Robber's Daughter" and Studio Ghibli's "When Marnie Was There"

"When Marnie Was There" opens in Japan July 19th. English subtitles are already completed 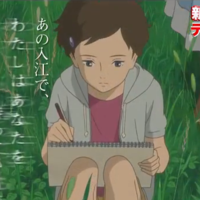 New ads also preview When Marnie Was There, the new Studio Ghibli movie from Secret World of Arrietty director Hiromasa Yonebayashi, opening July 19th. The adaptation of Joan G. Robinson's novel is the first Ghibli movie made without the direct involvement of co-founders Hayao Miyazaki and Isao Takahata.

It's a wrap! Completed English subtitles for #WhenMarnie Was There today. Well done, team. Now, back to #ThePrincessKaguya dub...

You can read an English language review of the feature here.