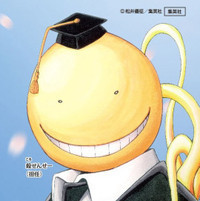 Fuji TV has posted a teaser ad for the 2015 Assassination Classroom TV anime. Danganronpa The Animation director Seiji Kishi, writer Makoto Uezu, character designer Kazuaki Morita and studio Lerche will be reuniting for the adaptation of Yūsei Matsui's hit Shonen Jump manga about a middle school class who have one year to learn how to assassinate their alien teacher or he'll annihilate Earth.

A special theme shop will be opening at the network's Odaiba New World this weekend. You can check out some of the goods at http://www.ansatsu-anime.com/goods/

Japanese Fans Rank the Anime Which Final Episode Made Them Cry