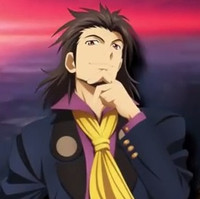 Last time we got a close look at character focus videos for Tales of Xillia 2 protagonists Ludger and Elle, and now Bandai Namco Games is back for more. The next pair brings us a couple two-minute trailers for returning characters Alvin and Elize, who leap into the sequel along with brief descriptions below.

Once a spy, the confident and brash Alvin has turned over a new leaf and struggles to lead a simple, honest life as a salesman. With his friend Yurgen, they forge a partnership in a business enterprise together… but as Alvin soon learns, there’s nothing easy about living an honest life. Will he remain true to the straight and narrow path he has chosen? Or will his shady past inevitably catch up with him?

Once painfully shy, Elize has warmed up considerably after the events of the first game and is more willing to trust others. However, she still looks for her own place in society, and yearns for companionship and acceptance from her peers. She eventually finds it in the form of her pen pal, Luna, but there may be more to her newfound friend than meets the eye.

Tales of Xillia 2 hits PlayStation 3 in North America and Europe on August 19 and 22, respectively.