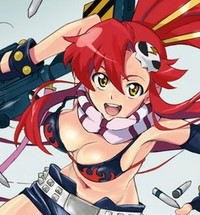 During the latest Tumblr Q&A for Adult Swim's Toonami block, a fan question about Gurren Lagann was announced in the most ideal of ways. Gainax's 2007 series is set to run on Toonami starting August 16 at 2:00am.

As for whether or not it will be in HD, some premature doubt was quickly shot down:

@ASSauLTxMasTER Jeez, learn to be happy before moving on to what to be sad about. It WILL be in HD, second goodie still to come. PATIENCE.