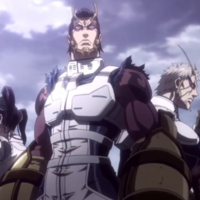 The official site for the Terra Formars anime project today posted a two-minute trailer for the upcoming two-episode OVA which covers the BUGS 2 arc set in the year 2599 and was told in the manga's first volume. The 25-minute first episode "00-01 THE ENCOUNTER" will be bundled with the limited edition of the 10th volume scheduled to be released on August 20 in Japan, then the second episode "00-02 UNDEFEATED" will come with the 11th volume in November. The price for the limited editions are both 1,980 yen (about US$19.45).