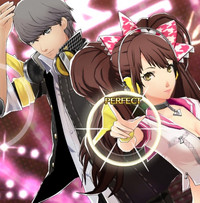 While it shouldn't come as a real surprise, Atlus says they have a few different things cooking that we haven't heard about yet. This week's issue of Famitsu features an interview with Atlus representative director Yukio Sugino and company director Naoto Hiraoka, who mention a new title they'll be able to announce soon, as well as brand new properties in the pipeline.

The title they might be announcing soon is outside the Persona series, and could be something related to Etrian Odyssey. Hiraoka adds that Atlus is working on "a title that is three years away" and that they're "preparing brand new titles like Dragon's Crown and Catherine at the same time."

Persona 5 is briefly mentioned as something that's progressing nicely and everyone at Atlus is enthusiastic about, and they touch on the increasing amount of fans the franchise has gained through its presence across various mediums, from anime to stage plays. Thus, they'd like to branch out other IP in similar fashion.

As for newer consoles like PlayStation 4 and Xbox One, Atlus says they "are not something we can afford to avoid. Naturally, we're focusing our attention on them."