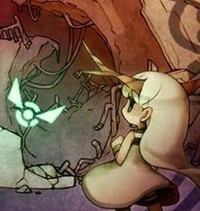 Are you looking forward to the western release of htoL#NiQ: The Firefly Diary? Would you be looking forward to it even more if it were coming to retail instead of digital-only? That's basically what NIS America wondered aloud on its Facebook page when asking, "Would a physical release of htoL#NiQ: The Firefly Diary brighten your day?"

The Firefly Diary was one of the titles NIS America announced for the west at this year's Anime Expo convention. The PS Vita game—which has you using the touch pad to guide a young girl through dangerous ruins with the help of two fairies—was initially announced for PSN, but perhaps NIS America has bigger plans coming after testing the waters on Facebook.