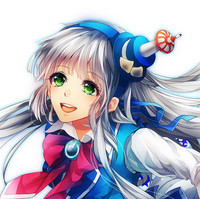 Despite their ongoing work on the Magica Wars adaptation, anime studio Gainax isn't what it used to be in the days of Evangelion and Gurren Lagann. Just look at their dismantled website, which no longer features their famous weekly welcome or even their General Products web store.

In a bit of new output, they (and subcontractor Wanpack) have produced an ad featuring the mascot character of private computer skills school Kyoto Computer Gakuin.