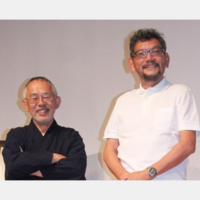 Studio Ghibli co-founder, producer and former president Toshio Suzuki took the stage with Evangelion creator Hideaki Anno to announce the complete list of 50 of Anno’s work from student films and promo videos to TV programs and theatrical features to be screened for October's 27th edition of Tokyo International Film Festival's special “The World of Hideaki Anno" programming. During this, Suzuki spoke to Anno's role in the future of anime, and the ever-popular subject of a next-Miyazaki, insisting that after Miyazaki, it has to be Anno.

The idea of featuring Anno's work as TIFF's centerpiece was suggested by Suzuki after festival organizers asked for ideas. He explained "Hayao Miyazaki would have been featured if he hadn't retired." Anno responded to Suzuki's offer "I couldn't say no to Suzuki-san, since he has done so much for me".

Suzuki also said, "I am certain that Anno will be the one to lead Japanese animation into the next decade" and "only people with talent can create. I would like him to cherish the god-given talent and keep producing". However, given Anno's responsibilities towards his own studio, Khara, no comments suggested that plans exist for Anno to take a role at Studio Ghibli.

Evangelion creator Hideaki Anno's career has deep ties with the works of Hayao Miyazaki and Studio Ghibli. Hideaki Anno worked as an animator for Studio Ghibli forerunner Topcraft on Miyazaki's Nausicaä of the Valley of the Wind. Anno impressed the crew so much that Toshio Suzuki has said that there was talk of making the ecological epic a trilogy with Anno directing the middle feature. He later voiced the lead in Miyazaki's final movie, The Wind Rises.