"Chaika -The Coffin Princess- Avenging Battle" is Slated for October 8

The OP song is again performed by Iori Nomizu 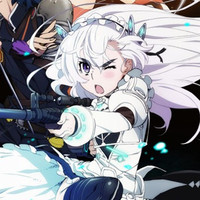 The official site for Chaika -The Coffin Princess- Avenging Battle, the highly-anticipated TV anime second season based on Ichiro Sakaki's popular light novel series, has listed its premiere schedule. It will be aired in the same time slot with the 12-episode first season in Japan. Check the schedule below.

It was also announced that Iori Nomizu, who sang the OP theme for the first season "DARAKENA" and

voiced Vivi Holopainen, is back to sing the second season's OP song "Shikkoku wo Nuritsubuse" (Paint over

the jet black). You can check part of the song in the first PV for the anime below. The ED song "Watashi wa

OP and ED songs will be released separately on October 29.