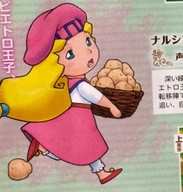 The story follows a young prince named Pietro, and familiar faces from the PoPoLoCrois series will  make an appearance. As for the Harvest Moon side of things, players will be tending to crops and animals and other ranch-based activities.

There are some major anime veterans among the voice cast, which includes Ai Orikasa (Quatre in Mobile Suit Gundam Wing) as Prince Pietro, Yuri Shiratori (Yukina in YuYu Hakusho) as Narushia, Masako Nozawa (Tetsuro in Galaxy Express 999) as Gilda, Masashi Ebara (Might Guy in Naruto) as White Knight, and Akio Otsuka (Black Jack in Black Jack, Batou in Ghost in the Shell) as Gamigami Devil.

Next "PoPoLoCrois" Game Potentially Hinted at in Sega Trademark