Capcom Teams Up with Dimps on New Fighting Game 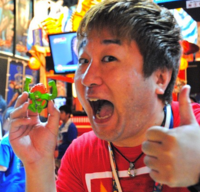 Capcom and Dimps, who previously worked together on Street Fighter IV and Street Fighter X Tekken, are teaming up again on a new fighting game. Capcom's Yoshinori Ono hopped on Twitter to say the company is recruiting colleagues to work with them at Dimps, and linked to a page that lists a "next-generation fighting game" in the description.

We are recruiting colleagues to work together with us at Dimps studio for new FG. http://t.co/VHLIEUBnIa

We'll have to wait to see whether they're cooking up something completely new or a fresh take on an existing property.