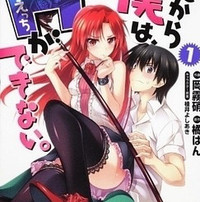 One title that didn't show up on Yen Press' recent flurry of licensing announcements was supernatural harem comedy So, I Can't Play H!. However, Amazon has the Shou Okagiri manga adaptation of Pan Tachibana and Yoshiaki Katsurai's light novel series debuting from the publisher in April 2015.

The listing describes it

One fateful day, Ryousuke Kaga, a typical hopeless romantic and hopelessly perverted high school student, has a chance encounter in the rain with a beautiful girl. After graciously offering both his home for her to dry off in and his help for anything she might need, the mysterious red-eyed beauty thanks him by stabbing Ryousuke in the chest! To further complicate matters, the girl, Lisara Restole, is actually a shinigami--that is, a goddess of death--and Ryousuke has somehow unwittingly agreed to let her use his "essence" to remain in this world. But instead of shaving years off his life like one might expect of a typical shinigami, Lisara seems more interested in...leeching the letch right out of him?!