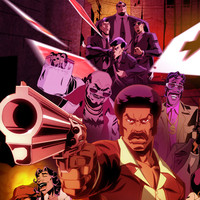 Hinted at over the summer with a glimpse at a visit to Trigger, the animation enthusiasts at Catsuka and series cre­ative producer/supervising direc­tor LeSean Thomas are confirming that Hiroyuki Imaishi (Gurren Lagann, Kill la Kill) directed the new opening for the animated Black Dynamite, set to return to Adult Swim this fall.

The action comedy series is inspired by the 2009 Blaxploitation spoof of the same name with Michael Jai White reprising the title role.

@JacobDavison89 @catsuka Ihinted at this over the summer w/ my visit to USP/Trigger/Sanzigen. But we keep things under wraps for a reason.:)