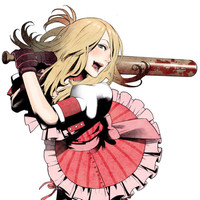 Following its run on the premium Fuji TV NEXT, American drama Breaking Bad is being released in Japan in three parts in August, September and October. It hasn't attracted a following who's posting R-18 yaoi to Pixiv the way Sherlock, the Avengers and Lord of the Rings have, but Yusuke Kozaki, the character designer of Fire Emblem: Awakening and No More Heroes, as well as creator of post-apocalyptic doughnut cat Donyatsu, is evidently a fan.