Jason Paul does an "arcade run" across a train 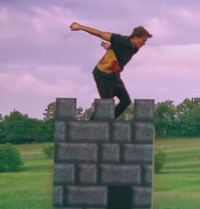 What do you get when you mix free-running, moving trains, and video game-inspired backdrops? You get a truly memorable parkour showcase, with Jason Paul leaping and flipping his way through an "Arcade Run" that looks like an absolute blast.

This cool little stunt was created in collaboration with Red Bull, and you can learn more about how they pulled it off over at their website.

The Set-Up in which Jason Paul and Team Farang are performing their run is simply awesome. The scenery is built in the look and feel of a 2D video game and reminds of legendary arcade games. Jason Paul needs to find the way out of a Maya temple, has to fight Ninjas before he finds his way over sketchy roof tops to the spot of the big show down: The fight against the final opponent, the end boss. Game over! Winner: Jason Paul.