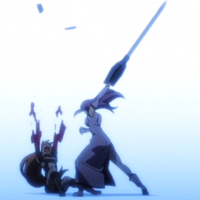 A new extended promo for fall's second half of the Akame ga Kill! anime has been posted, and, as you might expect, it's as much a highlight reel of death and violence as it is a preview.