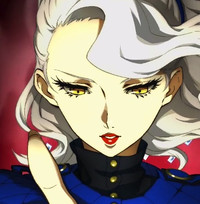 Atlus officially released Persona 4 Arena Ultimate's playable Margaret DLC in North America, where players can nab it off PlayStation Network and Xbox Live for $4.99. To celebrate the arrival of the Empress, Atlus is showing off her moveset in the trailer below.

Now that Margaret is out, that means both Adachi and Marie have reverted to paid DLC, so they're now $4.99 each. For more on the fighter's DLC, Atlus has a handy page.