Detective Conan is coming to Crunchyroll! 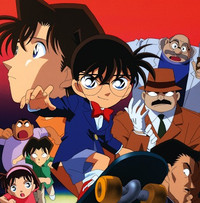 One of the announcements from Crunchyroll's NYCC panel this morning was the addition of Case Closed, AKA Great Detective Conan. More information is coming, but for now you can get ready to add more whoddunnits to your weeks in the future with simulcast episodes of the long-running mystery anime.

Case Closed will be available in the United States and Canada.

Based on the Weekly Shonen Sunday manga by Gosho Aoyama—which has been serialized since 1994, racking up 85 volumes and counting along the way—the Case Closed anime series has quite the history behind it. It's been running since 1996, and soon you'll be able to catch the latest episodes on Crunchyroll.