Produced by WIT STUDIO (Attack on Titan, Hozuki no Reitetsu) 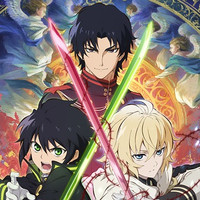 The official website for the upcoming TV anime adaptation of Owari no Seraph/Seraph of the End, the dark fantasy manga created by Takaya Kagami (story), Yamato Yamamoto (arts), and Daisuke Furuya (storyboards), launched today with the first anime key visual and the announcement for the three main voice cast.

Kagami is best known for his popular light novel series The Legend of the Legendary Heroes and A Dark Rabbit Has Seven Lives, both of which had a TV anime adaptation. The manga has been serialized in Shueisha's Jump Square since its October 2012 issue and now six tankobon volumes are available in Japan. VIZ Media has published its English editions in North America.

As you can see the list below, the staff who previously worked on the Attack on Titan anime series have joined

this new TV anime. The on-air schedule has not been announced yet.

Story description via Amazon US

After a catastrophic epidemic kills every adult on earth, vampires arise from the shadows to enslave the

But before he’s allowed to fight vampires, he has to complete his first, terrifying mission–make new friends

with his fellow aspiring monster slayers! Yuichiro and his friends are kept as vampire fodder in a creepy

institution masquerading as an orphanage. One day, Yuichiro’s dreams of fighting back are realized when

the orphans stage a daring escape. But things go horribly wrong, and his dream is kept alive at a cruel price.