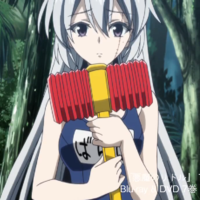 A new preview offers a look at the unaired episode 13 of Riddle Story of Devil, set to screen in Tokyo on November 22nd ahead of a release with December 17th's volume 7 of the anime series. The alternate-world take on the school girl assassin series shifts the premise to a deserted island death-match.

Crunchyroll Adds "Lord Marksman and Vanadis" and More to Catalog