"Final Fantasy Agito+" for PS Vita Has Been Delayed Indefinitely 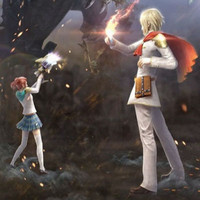 The latest Final Fantasy spinoff, Final Fantasy Agito+, was previously slated for a January 15 release, but now it looks as though Final Fantasy diehards will be waiting quite a bit longer to finally experience the game. So long, in fact, that there hasn't even been a date announced for the game. Yikes!

According to Square Enix, the delay was cuased by technical issues, and they are working to improve the game's quality, then announce a new release date.

Fortunately, the mobile version of the game is free in Japan and you can still play it for a taste of what to expect from the PlayStation Vita edition. And speaking of mobile, the quirky Final Fantasy VII G-Bike title was delayed as well, from Thursday of this coming week to Friday instead.

-------
Fueled by horror, rainbow-sugar-pixel-rushes, and video games, Brittany is a freelancer who thrives on surrealism and ultraviolence. Follow her on Twitter @MolotovCupcake and check out her portfolio for more.
Tags
final fantasy agito+, final fantasy, video games, final fantasy agito, square enix, ps vita
« Previous Post
Students Ate Studio Ghibli Meals in Real Life at a Japanese Middle School
Next Post »
FuRyu Releases Details on "Yuna Yuki is a Hero: Memory of the Forest"
Other Top News
6 Comments
Sort by: