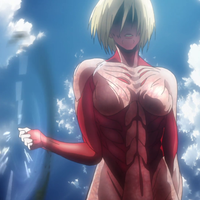 Japan's Toyko-based pop culture magazine Brutus has more information on the Attack on Titan crossover with Marvel Comics listed in its next issue preview. Issue 790, on sale November 15th will feature a "What If" comic with the Marvel's Avengers superhero team battling the Female Titan on the streets of New York.

The issue will also have more thoughts on the character and story from series creator Hajime Isayama as well as a preview of the exhibit at the Ueno Royal Museum that opens on November 28th.

Isayama draws the cover and a special Titan sticker.