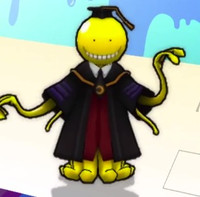 A Nintendo 3DS game based on Yusei Matsui's Assassination Classroom manga was announced last month, and now Bandai Namco is here with a teaser trailer. Get a glimpse of how the series makes the leap to portable action in the 30- and 60-second teasers for Assassination Classroom: Grand Siege on Koro-sensei below.

Tags
assassination classroom
« Previous Post
Yui Ogura and Maaya Uchida Join "Seiken Tsukai no World Break" TV Anime
Next Post »
For 7,400yen, You Too Can Wake Up Next to Hinata From "Naruto" Every Morning
Other Top News
3 Comments
Sort by: