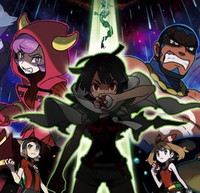 The Pokémon Company announced a couple new features for Pokémon Omega Ruby and Pokémon Alpha Sapphire this morning, confirming Deoxys along with a new story dubbed the Delta Episode. The latest addition to the full remakes explores the history of the Hoenn region and sends players on a world-saving quest. See a brief preview in the trailer below.

More on the story from the press release:

Pokémon Omega Ruby and Pokémon Alpha Sapphire introduce a new story, the Delta Episode, which reveals the history of the Hoenn region and thrusts Trainers into a quest to save the world. The Mossdeep Space Center, a research facility for studying space and rocket science, discovers that a giant asteroid is hurtling toward the planet. Trainers must stop Team Magma and Team Aqua from attacking the facility. Meanwhile, a battle in space is brewing between the Sky High Pokémon Rayquaza and the DNA Pokémon Deoxys, a powerful Pokémon that can transform between four distinct Formes: Normal Forme, Attack Forme, Defense Forme, and Speed Forme. Rayquaza faces a fateful challenge that will determine the future of Hoenn.

Helping Trainers restore peace to the Hoenn region are Sootopolis City¹s Gym Leader, Wallace, and the Hoenn region¹s Champion, Steven, both of whom hold secrets to stopping the asteroid. Trainers will also meet Zinnia, a mysterious girl rumored to possess the key to the fate of the world. Zinnia wears a Mega Anklet set with one of the mysterious Key Stones, which allows her Salamence to Mega Evolve.