Modder Hayleia's demake is available to download and edit 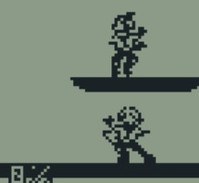 Back in my school days the most popular game we had on TI-83 calculators was a dinky weed-dealing game called Grow. Needless to say, the ambition for creating games on calculators has greatly expanded since, as evidenced by the fact that someone made a version of Super Smash Bros. playable on a TI-83.

That someone is modder Hayleia, who has been working on a Super Smash Bros. Melee clone for monochrome z80 calculators for some time. Now, with the latest in the series out Nintendo 3DS and its Wii U sibling on the horizon, you can download Super Smash Bros. and try it out on a calculator of your own.

Hayleia's version of Super Smash Bros. is open for editing, so anyone who wishes to help contribute can do so.