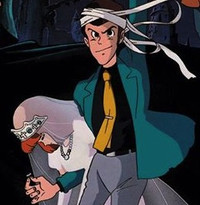 Discotek Media hopped on Facebook to share more info on an upcoming classic release, timed nicely after sharing details on the Horus, Prince of the Sun extras. This time the topic is Hayao Miyazaki's Lupin III movie, The Castle of Cagliostro, which will come packing three different dubs when it hits DVD.

The Discotek release of Cagliostro will let viewers choose between the 1992 Streamline English dub, the 2000 Manga Entertainment English dub, and the 2000 Family Friendly English dub. There's also an all-new English subtitle translation along with the 1980 Theatrical subtitle restoration, so there are a bevy of options on this one.

Extras include commentary with Reed Nelson of LupintheThird.com, original trailers, opening and ending collection, and translation notes. Discotek notes that the main feature also has the original Japanese opening.

Lupin the 3rd: The Castle of Cagliostro hits DVD on December 23.