First of two live action films slated for next Summer 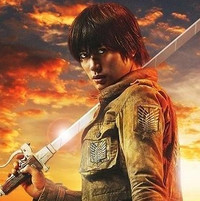 Following months of secrecy, the cast for the long awaited live action Attack on Titan film has been confirmed along with key visuals for each cast member in costume for their respective role.

As reported on Eiga.com, Isao Tsuge was in charge of costume design for the film. According to producer Yoshihiro Satou, "We weren't concerned about casting people on the basis of whether or not they looked like their character in the manga. After many discussions with Isayama-sensei, we cast people only on the ability to carry over the spirit of the character."

The cast members also spoke many times about their roles with director Higauchi before filming started. "They carried out their roles splendidly. One part would have no less than three costume meetings, camera tests, etc. Details on the 3-D gear and costumes were custom made so that each character matched their manga counterpart." Furthermore, "Isayama-sensei was a bit embarassed when came to the set and saw the military drills for the first time with the cast in costume. He gave them his stamp of approval."

special thanks to ultimatemegax for additional help