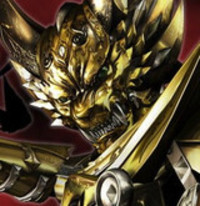 Fans of Garo have a lot to look forward to in the coming year, with the late-night tokusatsu series preparing to celebrate its 10th anniversary in 2015. Seven new projects were announced during the annual Garo: Golden Wolf Thanksgiving fan festival, including two theatrical films and a spin-off film, a new live-action series, a second season and film project for the anime, and a musical.

2013 series Garo: Yami o Terasu Mono (The One Who Shines in Darkness) is heading to theaters for a film called Garo: -GOLD STORM- Soar. The movie will be directed by original creator Keita Amemiya (Zeiram, Mechanical Violator Hakaider), and will act as an "episode 0" leading into a new -GOLD STORM- Soar TV season of Garo.

Those who have been following the Garo anime series can look forward to a second season and a film project, with further details to come.

A sequel film for the live-action season Makai no Hana, as well as a spinoff film, Biku Yamigirinochi—which will follow the mysterious Makai Priestess—were also announced at the festival. To top things off, Keita Amemiya will direct a Garo-themed musical project tentatively titled Makai Opera.