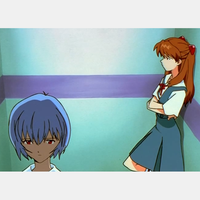 This fall, this there was plenty of talk from the Evangelion super-fan kremlinologists about the fact that copyrights on new Neon Genesis Evangelion material started just listing its new home Khara and not the original producers at Gainax. Those who speculated that it might be a sign that a Blu-ray release of the original TV series might be coming soon seem to have been proven right.

Two versions of the series and movies with an HD remaster will be released in summer 2015. Original character designer Yoshiyuki Sadamoto is set to be illustrating box art for the releases.

The End of Evangelion - HD master

Revival of Evangelion - HD master
- Death(True)2/Love is Destructive/ONE MORE FINAL: I need you

And also the DVD-Box

Release date, prices, bonus features, packaging to be announced at a later date for both.

SPONSORED: Evangelion's EVA-01 and Sixth Angel Touch Down in PUBG MOBILE Along with New Game Mode