While Hello Kitty gets in on the caboose, Hatsune Miku takes a very respectable 8th ranking 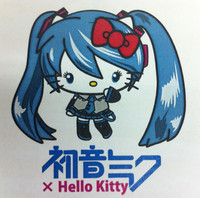 As Time magazine recounts 2014 and moves towards its famous Person of the Year, it's published a list of The 15 Most Influential Fictional Characters of 2014. While Hello Kitty gets in on the caboose, Hatsune Miku takes a very respectable 8th ranking, beating the likes of Mr Poo, the mother in How I Met Your... and American Yandere Amy Dunne.

What does it mean to be human? It’s a question philosophers have debated for millennia—and the Internet debated this year, thanks to Hello Kitty (who turned 40 this year). According to her official bio, which went viral in August, the iconic toon is not actually a cat; she’s a human girl who lives with her family in suburban London. That revelation made waves on social media, forcing parent company Sanrio to clarify that Hello Kitty is actually an anthropomorphized animal, like Mickey Mouse.

The computer-generated Japanese musician, whose “singing” comprises many short samples of actual human voices, not only launched a debate about the nature of artistry and performance (Hatsune Miku means “first sound of the future” in Japanese), but also performed via holograph at Madison Square Garden on Lady Gaga’s tour and on The Late Show With David Letterman—all without having a body.

Check out the full write-up here.