This and one other trademark were filed on November 13 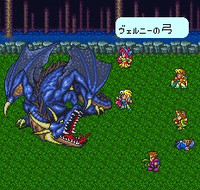 Square Enix recently filed a trademark for something called SaGa Asterism in Japan. The trademark was originally filed on November 13, and a SaGa series 25th anniversary live stream is scheduled for this weekend, so maybe we'll hear something about it shortly.

In addition to SaGa Asterism, Square Enix filed a trademark for Arcadia no Aoi Miko (The Blue Maiden of Arcadia) on the same day.