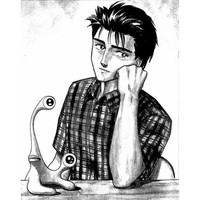 Factor in the differences in fashion between 1998 and 2014, and differences in style between author Hitoshi Iwaaki and character designer Tadashi Hiramatsu, and the cast of the Parasyte -the maxim- ends up looking remarkably different from the original manga. Fan video creator Kurobaru has answered the "what if" question of replacing the anime's designs with the manga's in a hand-drawn re-animation of the anime's opening.