‘There may be Japanese film-makers who can collaborate with Western creators, but I’m not one of them’ 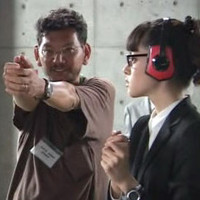 Screen Daily has posted their discussion with Evangelion creator Hideaki Anno from this fall's Tokyo International Film Festival. Going into the event, Studio Ghibli co-founder, producer and former president Toshio Suzuki called Anno a next-Miyzaki, saying that Anno "will be the one to lead Japanese animation into the next decade."

Anno discounted this, saying “Oh that’s just something Suzuki said. I didn’t take it too seriously.”

And, he discounted working with Western creators.

After accounting for his work in live-action, including Love And Pop, about the practice of ‘compensated dating’, ritual, about a washed-up director and his relationship with a psychologically disturbed woman, and the far less-realist and more lighthearted Cutie Honey, Anno discussed what was special about working in animation, and Japanese animation specifically.

“There are certain things that just can’t be done in animation - the characters are symbolic and can’t reach the same depth of emotion as, say, the actress in ritual,” he explains. But he adds quickly: “Only Japanese animation really explores our interior world and emotions. Japan is probably the only country that makes animation for adults as well as children.”

On working with international collaborators, or assisting on live-action adaptations of his work...

“The mental structure is too different between Hollywood and Japan,” he says. “There may be some Japanese film-makers who can collaborate with Western creators, but I’m not one of them.”

For more from Anno, including comments on his Cold War childhood and fascination with destruction and creation, see Screen Daily's interview.