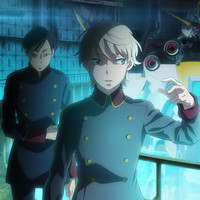 "To think we'd fight alongside each other again..." Aldnoah.Zero returns for its highly anticipated second season on January 10, 2015 with OP Theme  "&Z" from Hiroyuki Sawano "nZk": mizuki. Aniplex posted an English subtitled video of the third trailer.

Aldnoah.Zero fans, take a look at our all new Season 2 trailer and new keyart on our official homepage! http://t.co/uIbAetCeV2