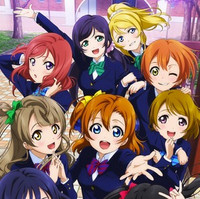 More Love Live! School idol project anime is on the way to theaters in Japan, with the tentatively titled Gekijō-ban Love Live! scheduled for an early summer opening. The release window comes from a listing of 2015-2016 films from Shochiku, and the distributor is currently celebrating its 120th anniversary.

The Love Live! anime movie was initially announced after the final episode of the second series back in June of last year. The tagline for the film is "Please! Fulfill our dream…"