September introductions phased out with new manga taking their place 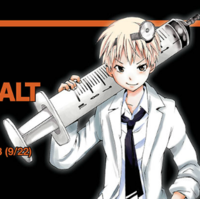 Reportedly, an early look at next week's Shonen Jump 2015 issue 10 has Sporting Salt concluding with the next chapter. The ending sports medicine manga follows other September launches Judos and Hi-Fi Cluster, all of which were sampled, or in the case of Hi-Fi Cluster, carried in the English digital edition of the magazine.

A low ranking for E-Robot suggests that it might also not be around for long.

Issue 11 will also have Karada Sagashide, a special chapter of Akira Amano's (Reborn) Eldlive and an important announcement.