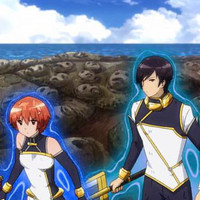 As the series prepares to join their winter "Broadcast Dub" line-up, FUNimation has announced the English dub cast for the TV anime adaptation of Akamitsu Awamura's action fantasy light novel series World Break – Aria of Curse for a Holy Swordsman.

Akane Academy is just like any other school…except the students just happen to be reincarnated legendary heroes from a distant past who battled for the fate of the world. Now, evil monsters are threatening to wreak havoc, and it’s up to the students of Akane Academy to stop them! Follow Moroha, Shizuno, and Satsuki as they navigate love, past lives, and kicking butt in this action fantasy with a dash of fanservice.