Compile Heart Countdown Ends with "Death Under the Labyrinth" Game

Next entry in the "Makai Ichiban kan" series announced 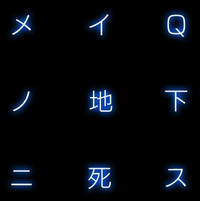 Compile Heart has been all about countdowns lately, and one of their recent teaser sites resulted in a new game reveal. What started as a nine-panel puzzle countdown still has two days to go, but this week's issue of Dengeki PlayStation magazine has the scoop on Death Under the Labyrinth (MeiQ no Chika ni Shisu), a new title for PS Vita.

While there isn't too much to go on beyond that, Death Under the Labyrinth is part of the Makai Ichiban Kan series, which also includes Makai Shin Trillion. The latter is due out on PS Vita this May, and for now we'll have to wait for the March 26 issue of Dengeki PlayStation for more info on the latest entry.