Adult Swim to Experiment With Earlier "One Piece" Rebroadcast

New episodes still at 3:30am 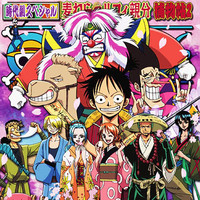 As they did with Dragon Ball Z Kai, Adult Swim is set to try out a rebroadcast of the previous week' One Piece at 8:30pm.  The programming block's Jason DeMarco clarifies that new episodes will be airing on the Toonami block proper at 3:30am.

So I don't get asked a million questions about it: this Sat, One Piece will air after the 8p DBZ ep on reg Adult Swim as an experiment.

It will NOT be Toonami. It will be last week's ep of One Piece, just like w/DBZ. If it does well it'll likely stay there for a while.

Got no other info for ya and no, this doesn't mean Toonami will be at 8pm. Thanks.