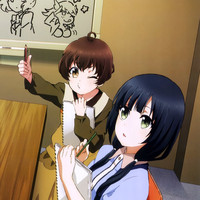 This weekend's BuzzFeed profile of Western animator Henry Thurlow's experience working in the anime industry was nothing if not provocative. Among those with something to offer in response was other international talent with experience in the field. What these alternative voices, in particular Yona of the Dawn animation director Cindy Yamauchi, had to say was that while, while the job is exceedingly difficult, the profile offered a reductive picture.

My side of story. I'm SAF American working as animator for Studio Pierrot, earning helluva lot more than $100/mnth, never been hospitalized.

And I'm planning to take an entire month off for vacation. Just saying this not to spite, but to be fair. Pierrot deserves better IMHO.

This industry isn't perfect, probably never will be, but it still deserves some level of respect.

The Buzzfeed's article is presenting a side of this industry that needs improvement, but it misleads everyone to think we're all poor.

What Henry mentioned in the article is true, as his side of story. Just thought I should present mine to offer a better picture of industry.

BTW, I don't get "paid vacation". I work hard so I can afford to take some time off. Work hard, play hard♪

@cindy560a same as you, worked almost 10 years with tough period but never less than 1k$/month ^^;

@cindy560a If you are talented and work fast you can make a proper living.

@cindy560a 1/5 Sorry I didn`t see/reply to this earlier Cindy. I actually gave a very long interview, which was edited down tremendously.