After working 18 years for the internationally acclaimed studio 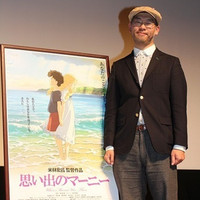 41-year-old Hiromasa Yonebayashi, the director of The Secret World of Arrietty (2010) and Marnie Was There (2014), confirmed today that he had already left Studio Ghibli.

He joined a talk show event for the release of the DVD/Blu-ray of Marnie held in Tokyo today, March 12, with Japanese figure skater Daisuke Takahashi who performed in the CMs for the disc. He announced that he left Studio Ghibli in the end of the last year and was no longer a member of the company. He said, "I talked with producer (Yoshiaki) Nishimura about what to do. I still want to make films, though it isn't clear what they will be like," and added, "For example, I want to try an action-oriented or fantasy film, which are totally opposite from Marnie."

His last film at Studio Ghibi, When Marnie Was There opened in Japan on July 19, 2014, and earned a

retirement from feature films, the studio was still open for business but was doing virtually none at all.