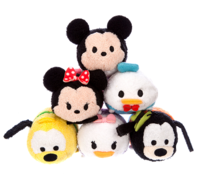 Beginning in December of 2014, Polygon Pictures – a Japanese 3D CG animation studio – and Disney combined forces to create a series of animated shorts based off of the Disney Tsum Tsum line of plush toys. These shorts originally aired on Disney Channel Japan and its affiliates, but now the first in the series is available online via Disney's Japanese Youtube channel.

The short is directed by Hiroshi Chida with CG supervision by Yoshiki Nakao.